The Rust Belt Market approached Strive Creative to create a Kickstarter crowdfunding campaign video in order to spread the word as to why they wanted and needed to raise money to build a new event space within their existing building. The campaign was a success and the event space was created.

We were happy to work with and create a crowdfunding video for The Rust Belt, because as an independent business, it was difficult for owners Tiffany and Chris Best to get a substantial amount of credit or be approved for a small business loan. Through the crowdfunding video we created, The Rust Belt met its goal and was able to put the money towards building walls, completing electrical work and additional necessary improvements.

“The Rust Belt has taken a defunct big-box retail space and turned it into a fertile ground for small, creative-based businesses to grow,” Tiffany said. “It’s a place where patrons enjoy spending time with family, friends and out of town guests.

With the help of the crowdfunding video campaign we created, The Rust Belt Market raised $23,680 (surpassing their goal of $20,000). 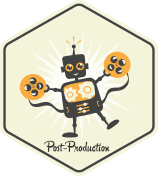